There is no checks-and-balance system. There is no means to determine whether an argument, a method or a conclusion is correct, slightly correct or completely bafflingly wrong. Nothing in place to improve the strength or eventually abandon the claim.

It is nothing more than, “In my opinion, it is possible…” and then whatever follows—no matter how deluded, incomprehensible or salient—as long as there is the remotest possible connection, becomes what is considered a “solid apologetic.”

The field “apologetics” comes from 1 Peter 3:15: “…and always be ready to give a defense to everyone who asks you a the reason for the hope that is in you…” The word “defense” is translated from the Greek apologia meaning a verbal defense or a reasoned argument. Simply put—it is explaining why one believes what they believe.

Let’s look at how an argument is prepared by a scientist, a lawyer and an apologist. Imagine we have a situation where the claim is, if you add sufficient copper to an experiment, it will turn the solution green. Work with me on this.

A scientist will carefully note the amount of the solution, the type of solution, the amount of the added copper, the conditions, temperature, time of day and so on regarding the experiment. Why? Because she knows eventually she will have to defend (apologia) the claim. To a hostile audience. To other scientists who may not be convinced adding copper is what turned the solution green. She is aware other scientists are going to repeat her experiment, both under the same conditions and different conditions. That scientists are expecting to rely upon results to make subsequent experiments, so they are going to make certain this is the correct conclusion.

The check and balance is the scientist knowing she will have to defend this claim to others who will test, probe, question, replicate and do everything they possibly can to prove her incorrect before being satisfied with her conclusions.

The scientist will therefore do her own re-experimenting under a variety of conditions to bolster her claim. She will approach her own experiment as if she was opposed to the conclusion.

A lawyer is slightly different. The lawyer is attempting to convince a neutral determinator—not a hostile one. A jury uncaring as to whether the copper turns the solution green, purple or does nothing at all. However, a lawyer anticipates having a hostile opponent who will do everything within their ability to show the opposite conclusion. Equally the lawyer has to anticipate how convincing the claim would be to the jury, in light of opposing evidence.

Eventually the check and balance to the lawyer is when the jury finds either for or against him. This conclusively demonstrates the strength of the apologia.

But where do we have that in theistic apologetics? Nowhere! Where is the concern of the opposing argument? Where is the check and balance. Using our same experiment, imagine we have an apologist who…oh…I don’t know…believes the sun turns solutions green. All our apologist has to do is:

1) Show one (1) experiment that occurred in the sun
2) Show the solution turned green.

Voila—they have given a reason, an apologia in support of the claim the sun turns solutions green! And all the sun-worshipping adherents bow in submission—glorifying the “proof” of their belief. So what if the same thing happens in the dark. So what if it never happens when other additives are introduced in the sun.

As long as the apologist shows one (1) instance of it occurring—this is deemed sufficient “reason” for their belief! And if you are not convinced—it is because you don’t like the sun. Or you don’t like heat. Or you never believed in the sun in the first place. Or you want to tell the solution what to do. Or you are a nihilist. The apologist has plenty of reasons why you can’t plainly see it was the sun turning the solution green.

Hyperbole? I think not.

The Book of Mormon indicates (at Ether 9:19) there were elephants in Mesoamerica, at least around 2500 BCE. The problem is, there are no indications of elephants. No bones. No drawings. No anything that would ever indicate the American species of elephant existed.

To the scientist, since elephants have a certain impact on ecosystems, leave remains, and would have been recounted in stories or pictures or sculptures—they realize any claim elephants lived in 2500 BCE Mesoamerica would be a daunting task. They would understand the skepticism of other scientist. Understand the evidence they presented to claim elephants did exist would have to be substantial to convince, or at least sufficiently plausible to give consideration.

To the lawyer, they realize their opponent will scoff and mock them regarding the lack of evidence. That the proofs would have to be presented in such sufficiency, a neutral jury would be convinced. Most importantly, the lawyer must always, ALWAYS maintain credibility with his jury.

An apologist? Heck, his or her audience already believes elephants lived in Mesoamerica in 2500 BCE, all they have to do is present one (1) possible item of evidence, and their apologia is considered sufficient.

So they cough out this drawing of what appears to be elephants on Stela B of the Great Plaza of Copan. 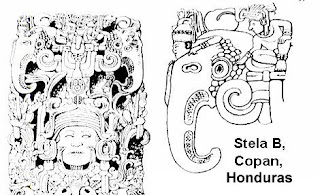 The Stela was made sometime around 700 CE. (Approximately 3200 years after elephants lived!) (H/T to Sam for this drawing.

Here’s a helpful tip. If anyone ever gives you a “drawing”—look for the original. See, if you look at a picture of Stela B you will see that the upper parts have been completely broken off! This is NOT a drawing of Stela B! 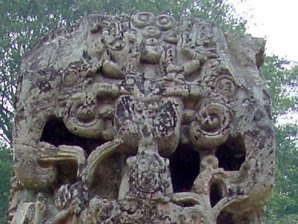 It is not clear to me where the drawing on the right--the “close up” of the elephants is from--but it may even be another Mayan Structure.

Do you see how useless apologetics is? How a scientist would NEVER present such a drawing, realizing others will attempt to verify it and would question its veracity. How a lawyer knows his opponent will point out this isn’t a drawing.

Anyone can think up a reason. Catch a two-year-old with their hand in the cookie jar, and they will apologia how they were not stealing cookies. We didn’t accept it from two-year-olds; why would we accept it now?
Posted by DagoodS at 10:00 AM