Roger Ebert died. Famously (as you know) reviewing movies with his friend, Gene Siskel wherein each would give a movie a “thumbs up” or a “thumbs down” A good movie would be “two thumbs up.” “Two thumbs up” became part of our vernacular.

Now, if you asked my opinion of a restaurant, and I said, “two thumbs up!” you understand the meaning—not only do I approve, it was particularly good.

Imagine most of Siskel & Ebert’s reviews were lost. But we still had numerous copies of Happy Days and the Fonz giving his famous two thumbs up. 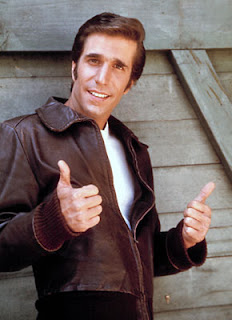 The point being, allusions in culture are difficult to track with precision. Even more so when discussing a culture 1000’s of years in the past, with a different language, society, religion, economic make-up and government.

I am currently reading The Myth of Persecution: How Early Christians invented the story of Martyrdom and will eventually write a review. Vinny and Bruce Gerencser already wrote reviews. The author—Dr. Moss—argues some Christian Martyr myths were derived from allusions to Socrates death, specifically the Martyrdom of Polycarp. She states:

There’s no doubt that the author of this account [Martyrdom of Polycarp] wants to portray Polycarp as being just like Jesus or, to use religious terminology, an “imitator of Christ.” At the same time, however, there are parallels with other important ancient literary traditions. Both Polycarp and Socrates are described as “noble” and charged with atheism. Neither was willing to persuade others in order to save his life. Socrates took control of this death by requesting the hemlock rather than waiting for it to be administered to him. Polycarp took control of this death by removing his own clothes and standing on the pyre without being nailed to a stake. Both Socrates and Polycarp prayed before dying, and the accounts of their deaths explicitly interpret their deaths as sacrifices. Socrates refers to Asclepius and pours out the hemlock as a libation offering, and Polycarp is described as being like a ram bound for sacrifice. With regard to the image conjured up in the minds of the audience, both men are elderly….Finally, their deaths are described as models for others.

I initially thought this a bit too much stretching to make her case. Too speculative.

Socrates was condemned by his fellow citizens of Athens, Greece, for failing to worship Athenian Gods and for persuading others to follow his philosophy. He was sentenced to death by poison in 399 BCE. Plato gives an account regarding the death of Socrates wherein Socrates takes a bath, dismisses the women, and prepares for death. The jailer apologizes for doing his duty, provides the poison, Socrates drinks (making speeches along the way, of course) and then dies in noble fashion amongst his wailing friends.

Polycarp (according to the Martyrdom of Polycarp ) was killed around 150 CE. [It is unclear when the Martyrdom of Polycarp was written. Dr. Moss argues for early 3rd Century, whereas I tend toward middle 2nd. *shrug*] When taken, the soldiers (like Socrates) repented and were regretful for doing their duty. Polycarp also made speeches throughout. However, there are many differences. Polycarp predicted his own death by fire. Miracles surrounded the event such as he was not being consumed by the fire, so a soldier stabbed him in the side and a bird flew out, along with so much blood, the fire was put out!

There are numerous differences causing one to wonder whether the few similarities were really an allusion to Socrates.

We have another story from the same time period--Lucian of Samosata wrote The Passing of Peregrinus around 165 – 175 CE. Peregrinus was a cynic philosopher (who embraced Christianity for a time) and decided to establish his own immortal reputation by killing himself at the conclusion of the Olympic Games. Lucian writes a sarcastic tale regarding the entire incident.

What is interesting, though, is Lucian’s direct reference to Socrates’ death. For example, Lucian noted when imprisoned for Christianity, Peregrinus was called (by Christians), “the new Socrates.” After he died, Peregrinus’ companions stood around the fire—Lucian mocks them, asking if they are waiting for a painter to paint them like the companions of Socrates.

Upon returning to the city from Peregrinus’ pyre Lucian notes he informed intelligent people what precisely happened, but to “dullards” he made up whatever would suit his recipient’s fancy. Lucian even made up a tale about a vulture flying out of the fire and an earthquake. Humorously, Lucian chances upon a gray-haired fellow who tells Lucian he (the gray-haired man) saw the vulture flying from the fire—Lucian is astounded because the tale had just been made up by Lucian himself!

Interesting Polycarp had a bird fly up at the time of death, and Lucian did as well. Did the Passing of Peregrinus impact the Martyrdom of Polycarp? Or vice versa? Or were both using symbols lost to us? Or is it a coincidence?

(Christians may also take note Lucian added an earthquake to the event. One can’t help but wonder about Matthew doing likewise at Jesus’ death. Matt. 27:51)

As I read the Passing of Peregrinus, I am more firmly convinced the story of Socrates’ death continued to have cultural significance. Too often we treat these tales as black and white—it happened exactly as recorded or it didn’t happen at all. We may not be realizing how many additional details are introduced that would provide substantial insight to the people of that time and culture, and are lost to us now.